Why are cards for boys so difficult?! 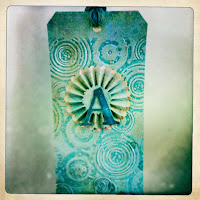 Today is my brother-in-law's birthday. He'll not want to be made a fuss of so I'll keep this post understated (!) but the principle of my musings today is that creating cards for boys can be really hard. We hope that they appreciate the time and effort we have put into making them a token for the big day but are never sure if they do... and  I am constantly searching for relatively simple ideas that a boy of any age would like but which also means I feel I have put lots of effort in too! 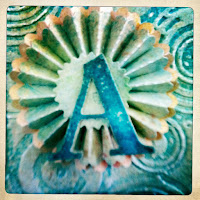 This is my latest attempt at this kind of win win utopia! Firstly I cut two tags from blue cardstock and used my tag die and my  trusty Vagabond (oh! how this has changed my life and reduced the size of my biceps now I no longer use my Cuttlebug!)  I inked a Retro Circles Texture Fade from Tim Holtz with Broken China Distress Ink - just stamp the pad directly onto the Texture Fade, depending which side of the folder you use will change the effect when it's finished so it's worth a play with scrap paper! Then I fed it through my Vagabond with one of the tags and crossed my fingers that I'd inked the right side! 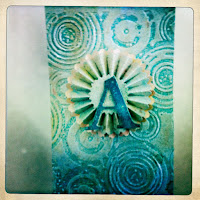 The effect is that the ink is pushed to the back of the pattern and the raised sections remain uninked (you can also stamp images onto Texture Fades like I did here). I then did a bit of distressing (added spots of ink etc with a mini mister) and covered it all with a fine spray of Heirloom Gold Perfect Pearls Mist. I then cut out two mini rosettes and turn one round to reveal a lighter side before putting them together and adhering to the tag. I inked a grungeboard alphabet  soup letter in Broken China and covered it with clear embossing powder. I used the larger of the two rosette centres and put the two on the rosette. The last thing to do was to glue the second tag on the back after we'd written it (it's very hard to write on card that's been through a Texture Fade!) I added some lovely sari ribbon and then popped it on the present... Hope he likes it! If you have any ideas for boys cards I'd be really keen to know them!

It's a fair swap! 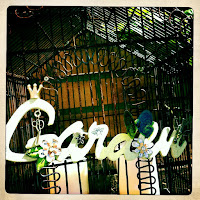 My lovely sister offered to make me some bunting for Freya's Mad Hatter's birthday party and in return asked for me to decorate a word similar to what I did here. How can a girl refuse such an offer (and I'm glad I didn't as the bunting was beautiful!) As this word is 'garden' I was aiming to include a little of the garden in the 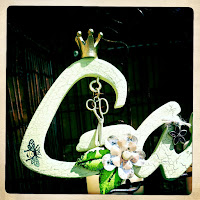 embellishments and one was was to try and make it look a little weathered. I painted the word in PaperArtsy Old Gold paint, waited impatiently for it to dry, painted a layer of PaperArtsy Crackle Glaze, waiting impatiently again (ok, waited with a heat gun in my hand!) and then painted PaperArtsy's Guacamole over 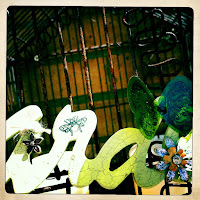 the top (and edges). If you haven't tried the Crackle Glaze, you really should - it works so quickly that by the time I was painting the 'r' the 'g' was already cracked! Then it was just down to adding bits and pieces. My sister is the 'queen' of gardening in our family so a crown was essential! I used some of Tim's Foliage flowers 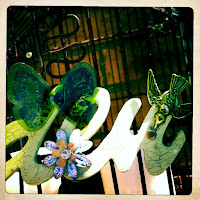 covered in Paint Dabbers (Snow Cap, Citrus, Silver) and PaperArsty Butternut paint. The small flower was tied on with garden twine and had been painted with Pink Sherbet Alcohol Ink and the bird is coloured with Lettuce Alcohol Ink. The butterfly was punched out from acetate with a Stampin' Up punch and stamp in Black 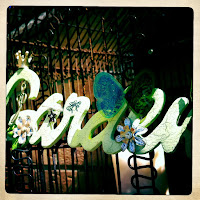 Archival Ink and lettuce Alcohol Ink. The bees are an old favourite stamp which I painted the wings with misted Broken China Distress Ink and Butternut paint. As I did stamp on the word I am sneakily adding this make to the Sunday Stamper challenge this week which is 'Words'. I hope my sister likes her return thank you for my bunting! Gabrielle x
Apologies that the photos don't show the colour and crackles well - it's been unseasonably bright, hot and sunny today and there was nowhere in the garden in shade!
Posted by Gabrielle 3 comments:

One Saturday in June... 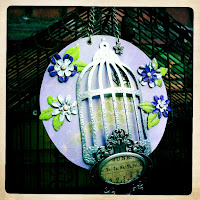 Hello! Hope you are having a lovely day! Today has been really nice here - making up for the unseasonal rain showers! I have taken a week to make today's offering - not because it's highly complex but because time just doesn't seem to be on my side at the moment! Anyway I am combining today's project which has this week's 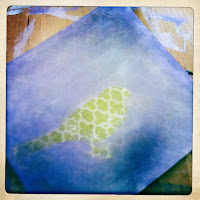 Grungy Monday challenge at Studio L3 with Simon Says Stamp and Show's to use metal. The background was made by using Tim's technique. I use My Mind's Eye Paper (a favourite!) and covered the bird (PaperArtsy stamp from HP1005) with clear embossing powder. Then I painted the paper with Adirondack 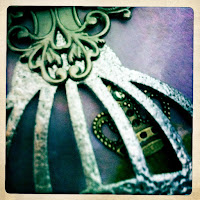 Snow Cap paint and PaperArtsy Pansy, smoothing the paint with Cut n Dry foam as Tim suggests! I added a crown on the bird's head and a little green jewel that just peeps out. I glued the paper to a CD and cut to fit! I embossed a Grungeboard birdcage (cut with my trusty Vagabond!) with silver powder (both sides as I made it stand proud), painted Foliage 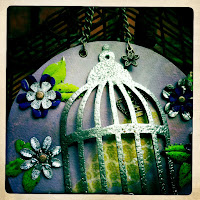 flowers with Adirondack paint (Citrus, Snow Cap, Purple Twilight, Silver and Gold) and attached an Ornate Plate to the bottom of the cage - it was originally going to be on the top but my hairdresser suggested putting on the bottom and who am I to argue with a fellow artist?! I added some chain and a finding that I bought 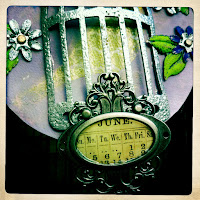 today from lovely Lin's LB Crafts and that was that. This is my 'June' for the calendar I am building. My original June was sold so this is it's replacement! Have a fabulous rest of the weekend! Gabrielle x
Posted by Gabrielle 5 comments: 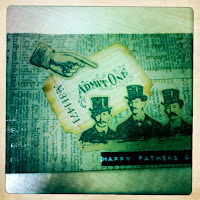 Have been utterly rubbish at blogging over the last few weeks - mainly due to one strange illness after another. Those who follow me on Twitter might know I'm having a weird hayfever reaction which is affecting my eyelids - goodness knows why as I don't normally get hayfever!!! Still they seem to be slowly reverting to normal so I'll 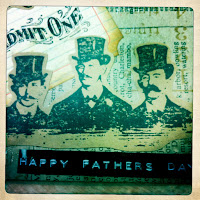 be back on top form soon! Any way - I thought I'd wish my lovely dad (and all the other lovely dads) a very happy Father's Day - we really value your love and support and are so lucky to have you as our dad! The card was some of Tim's fabulous Kraft Resist paper, Steampunk stamps (stamped on the reverse of the 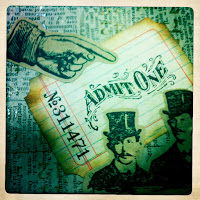 paper with Black Soot Distress Ink and cut out) and a ticket. My trusty dymo came out for the sentiment and that was that!
Gabrielle x
(posted this from my iPhone so I hope it works! I'll add proper links next time I'm near a computer!!!)
Posted by Gabrielle 2 comments: 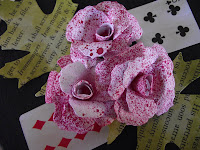 My darling daughter will be 11 on Saturday (yikes! Where has the time gone?!) and in her honour we're having a Mad Hatter's Tea Party on Sunday. I would normally post this on Sunday but I have so much to do and I am so proud of it that I 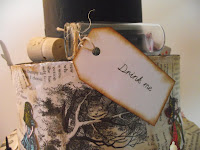 thought I'd sneak it in early! Linda at Studio L3 hosts a weekly Grungy Monday challenge. This week it's Distress Inks and this is my entry! I had the idea from Morag Cutts' design in Craft Stamper April 2011. I bought 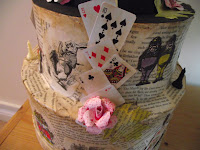 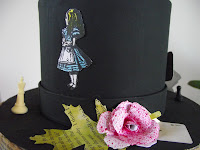 Then I covered the white paint with white tissue paper and Mod Podge though wasn't too careful allowing for a few areas not to be covered and a few where the issue paper bunched up. I bought a very cheap version of 'Alice in Wonderland' and ripped pages and Mod Podged them 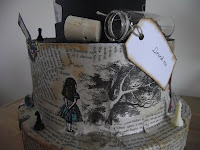 on. When dry I added Vintage Photo Distress Ink to give an aged look. I bought an Alice stamp set and, using Jet Black Archival Ink, stamped out various images. Then, using Distress Inks, I watercolour painted the images - going over some colours a few times to 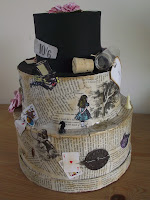 get a depth of colour (I used pretty much all of the colours Tim makes so couldn't possibly list them!) I cut them out (rescuing a few from the dog!) and then adhered them on with Glossy  Accents. The vial was left over from the ArtsyCrafts day back in February so I made a 'drink me' tag using my trusty Vagabond and the Tiny Tabs and Tags die, added Vintage Photo to the edges and tied it to the vial with string. 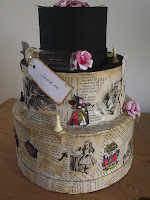 I laid the vial on it on it's side, poured Glossy Accents in to it and watched it drip down the side of my 'cake'. Before it dried I sprinkled Heirloom Gold Perfect Pearl powder onto the Glossy Accents. To be honest it wasn't as dramatic an effect as I hoped but I know it's there! I glued the stopper down with Glossy Accents too! I made loads of flowers from white card cut with the Tattered Florals die spraying them with Red 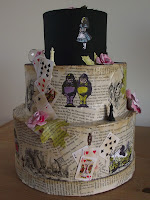 Lava Cosmic Shimmer first. The leaves were cut from more book pages and the Tattered Leaves die and inked with Shabby Shutters and Crushed Olive Distress Inks. Then I went a bit mad adding chess pieces, small key and lock brads (from Woodware I think...) and a Timepiece and Game Spinner. 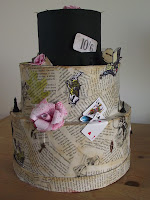 I hope the weather holds for the party on Sunday! Have a great weekend!
Gabrielle x
If you know of Moira's contact details I'd love have them to be able to thank her for her inspirational idea!
Posted by Gabrielle 8 comments:

Gabrielle
I am really lucky! I have lots that I do that I enjoy, but if I could craft full time (from a beach in the Maldives!) I would be very happy! I have some great friends who share my passion and I hope you might be one too!

I am very proud to be on The Design Teams for: Country View Crafts 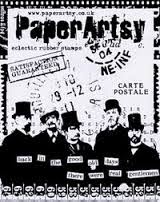 Some of the lovely folk who like my work...

Some Blogs I love!

Thank you for respecting my copyright. The content of this blog belongs to me, unless otherwise stated so please respect my copyright and credit me when using any of the content or designs. Please do get in touch if you want to use any of my photographs or art. Thank you for understanding.